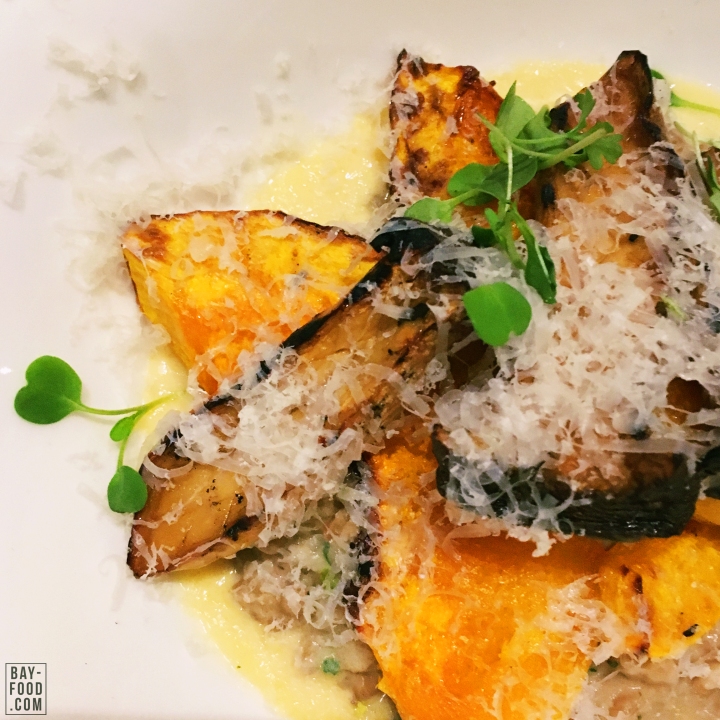 Broadway (Laguna Beach, CA) – After that wedding reception (in the previous post), everyone was ready to chill and enjoy the night. I never realized how close Newport and Laguna were until this trip! I believe one of my cousin’s friends chose Broadway, and it was a really good choice. Broadway by award-winning Chef Amar Santana focuses on his interpretation of modern cuisine of the Americas. Chef Amar Santana was on last season’s Top Chef, making it to the finale, where he used inspiration from his Dominican and New York roots, which are also exhibited in the menu. 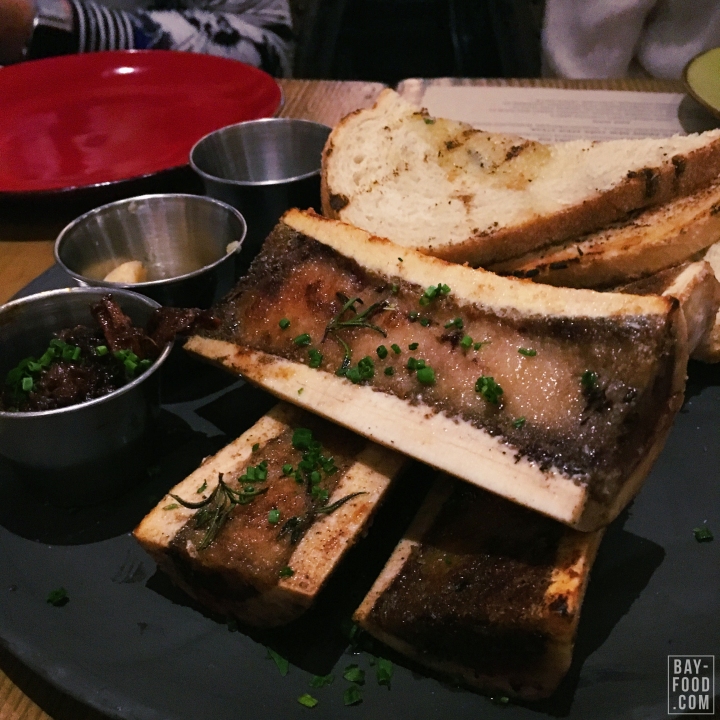 The restaurant was pretty busy, but not surprising considering it was a Saturday night, but we had reservations which made the experience seamless. Before our entrees, we started off the meal with a few appetizers. One of the appetizers at our table was the Roasted Beef Bone Marrow, which had oxtail mushroom marmalade, garlic confit, served with grilled sourdough bread. I am not a fan of bone marrow at all, so I did not partake in this. The rest of the table, however, did really enjoy it. Instead, I spread the oxtail marmalade onto the sourdough bread, which was amazing! You could literally make a sandwich with that spread and it would be a meal. It was smoky, meaty, and had those sweet and tangy flavors of a marmalade. It was so interesting and unlike anything I’ve ever had. 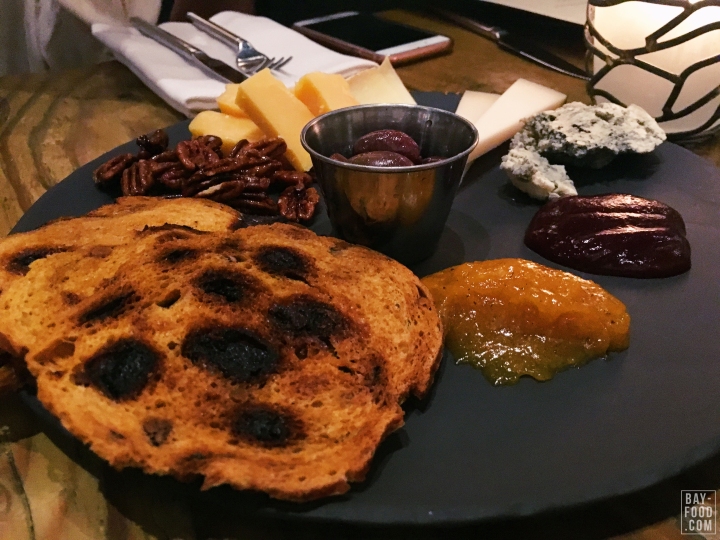 Of course, considering I was with my cousins/family friend group, we had to get a cheese plate! This is Broadway’s Artisan Cheese Plate, which are assorted cheeses served with dried fruit and walnut bread with condiments like jams and olives. The jams were really good, and I always am surprised at how good of a combination jam and cheese is.

Onto the entrees. I believe my sister ordered this, but OH MY GOSH, It was my favorite! I even took it back to our hotel because I enjoyed it so much. This is the Creamy Farro Risotto with Grilled Trumpet Mushrooms, Roasted Butternut Squash, and a Citrus Butter Sauce. In fact, Risotto is what Chef Amar Santana cooked on his Top Chef finale, and broke the curse of having unsuccessful risottos on the show. SO, the man knows risotto. It was so perfectly creamy and buttery without being soupy, and it wasn’t overcooked and hard either. I’m not a big fan of mushrooms, but I ate everything I could on this plate until I got full. My mouth is literally salivating as I write this up. 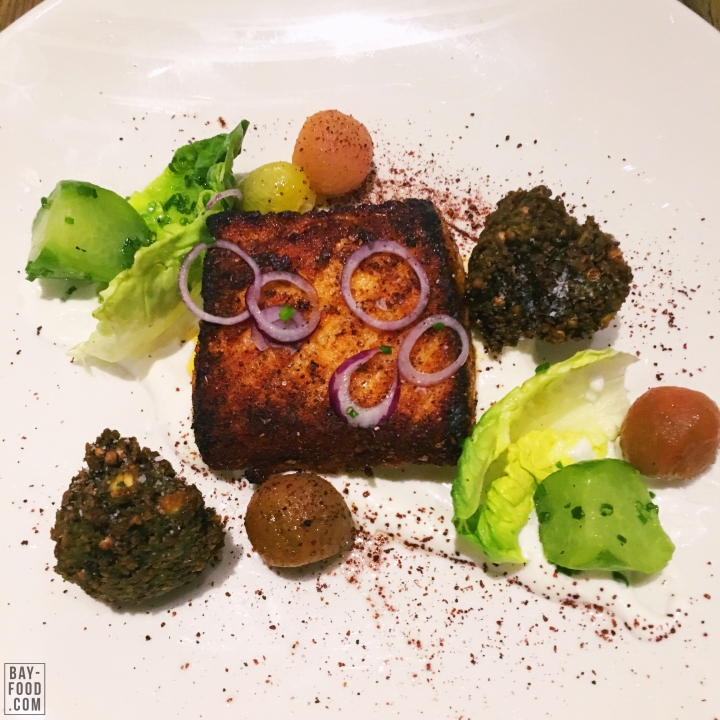 This was actually the entree that I ordered, the Shawarma Spiced Scottish Salmon. It was served with Falafel, Meyer Lemon Yogurt, Gem Lettuce, and Confit Baby Tomatoes. The salmon was cooked perfectly so it was tender, and it has all of those Mediterranean flavors that I love, but I actually think this was too safe for me. In my opinion, I could get food with these flavors at a lot of places that I frequent, so I should have ventured out. If you enjoy middle eastern and Mediterranean flavors though, this would be a fantastic option!

And again, because I was with this group, we got dessert. I really enjoed the Lemon Ricotta Fritters, adorned with candied lemons and drizzled with lemon cream. Any type of fritter, I am here for. Fried sugary dough is one of the greatest inventions of mankind. I think I ate more of this than anyone else, but that’s okay because they were all enamored with the dessert below! 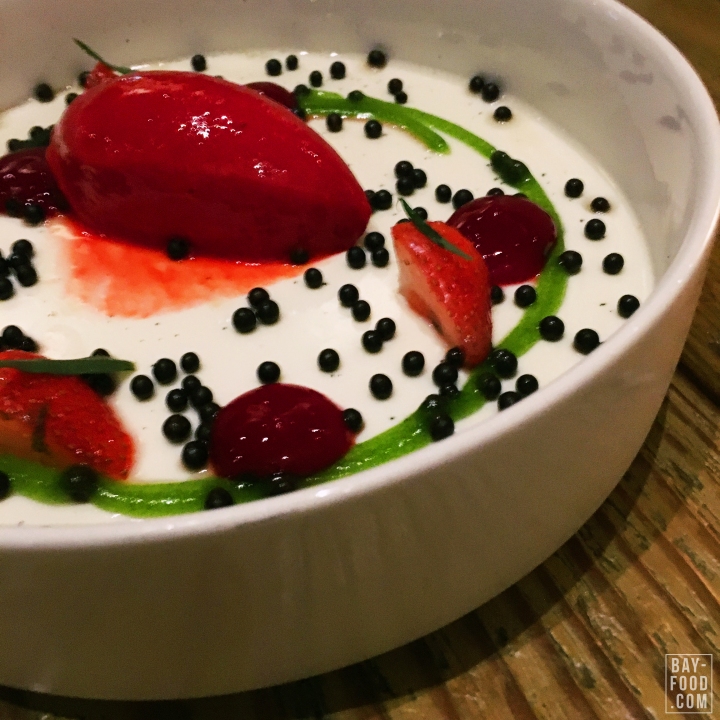 The other dessert we ordered was the Bourbon Vanilla Bean Panacotta with Strawberry Sorbet, Chocolate Pearls, and Tarragon. I did not try this one, however, I heard it was really good. It sounds like such an interesting combination with the tarragon involved. I enjoy sweet dishes that mix in savory herbs.

If you happen to be in the O.C., Broadway is a must visit. Everything we ate was fantastic, and it’s really chill in there. Later on in the evening they started playing 90s hip hop, which we all thoroughly enjoyed. Also, if the chef wants to send me that risotto recipe, pls hit me up, because I still think reminisce about it from time to time.

Recently, I saw a tweet that said 90% of that person's social life revolved around food outings in normal times and that's 100% accurate for me.⁣
SO glad it's Friday (I feel like I say this every week 😂). I thought it'd be a chill week at work - to the point that I said this to a coworker - and I spoke too soon. I got one of those 4:55 pm emails that was actually urgent for once and took up the rest of the week. If this was the Before Times™, I'd be looking forward to a weekend brunch out but hoping to do something fun that doesn't involve looking at a screen. And yes, I still like avocado toast, ok - it's reliable.⁣
Happy Valentine’s Day! Regardless of the occasion, today feels like a good day to cozy up with a nice cup of coffee. I visited Foreigner Cafe a few months before the pandemic and had a nice, cozy brunch while catching up with some friends! Check out the full post on my blog; link in bio. ☕️⁣
Didn't this week feel extra long? I'm *so* glad the weekend's finally here. I only wish I could treat myself as well as I was with this dessert spread from Sun & Moon. We were served this pretty spread of mango sticky rice in the coconut, a green tea ice cream in a sandwich roll, and sliced honeydew. I love anything mango and enjoy matcha/green tea desserts, so I ended up eating more dessert than I planned. 😅 I've also never seen ice cream served in a sandwich roll (it's a Thai street food treat), so that was something new! It's fun getting surprised by something new after eating and reading a lot about food in the last 10 years. To check out my full (pre-pandemic) dining experience, check out the latest blog post; link in bio. 🍦Sun & Moon in SoMa is open for takeout, delivery, and outdoor dining.
My first time having kabocha squash curry! It reminded me of a pumpkin curry I've had before and it was delicious. It also sounds like the perfect dish for another rainy week. Check out the full blog post about Sun & Moon on the blog; link in bio. @sunandmoonsf in SoMa is open for take out, delivery, and outdoor dining.
☀️ Yay, finally - my first restaurant blog post of the year! I'm taking it back to when I visited Sun and Moon in the before times as part of a work lunch. We enjoyed delicious central Thai food that features high quality seasonal and local ingredients. Just look how colorful our spread from the meal was! I love Thai food and there was so much to sample, so I left a very happy and full person. Find out what I ate on the blog; link in bio. 🌙 Sun & Moon is open for takeout, delivery, and outdoor dining.